OPEN CALL 2021 is now closed. Thanks to all participants, the winners will be announced soon. 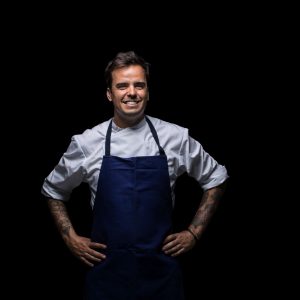 After a course at the Natural Gourmet Institute for Health and Culinary Arts, in New York, Diogo Noronha worked in world-famous restaurants such as Pure Food and Wine and Thomas Keller’s Per Se***, as well as Moo* in Barcelona, and Jordi Villa’s Alkimia*.

He returned to Portugal in 2009 to set up the Pedro e o Lobo project, where he remained until he was invited by the Mainside Group to open the restaurants Casa de Pasto and Vinharia in Cais do Sodré, in 2013. In 2015 he opened the gastrobar Rio Maravilha in Lx Factory.

These projects led to a Time Out chef of the year award in 2015 and El Mundo referred to him as one of the six chefs who were revolutionizing Portuguese gastronomy.

In 2016, he accepted the challenge from Rui Sanches to create a new, bold, unique and differentiated concept in Lisbon.

That is how Pesca was born.

He is currently responsible for the practical classes of a course at the Escola de Hotelaria de Lisboa, which intends to be a new approach on the way we feed ourselves and how food in the future will be.